»Hafenlesung was born out of chance and desperation, a marvellous bastard conceived by strangers in a strange land:
the first time I saw Tomás Cohen, co-founder of our reading series, he was wearing a Fedora and Poncho combination. The Chilean had come to my bar to wet his lips and smoke his hoary pipe. There was no middle ground. This poet was either a pretender or the real deal. It didn’t take long to establish the latter.
We drank, we laughed, we professed our love of literature – that eerie place between chaos and order. Our two beards became three, then four. Adoption of the feminine put an end to this follicular madness, thank god. Hormonal harmony meant the betterment of a collective with roots in Chile, New Zealand, Somalia, Greece and Germany.

Such is my recollection of the impetus that produced this labour of love. Yet, like many unexpectant parents, I had my doubts. We needed a platform. A space for emerging and established writers to show off their goods. But our project was never going to be a traditional reading series, keine Wasserglaslesung. We had to avoid the pomp and circumstance. The conflation of literature with high culture is a hangover, a reminder of the past when invitations to the party were few. Rigidity turns to stagnation wherever doors are closed so our event would have to be accessible and welcoming. Location was important. We needed ambience, late nights soaked into the floor and stains on the ceiling. Such gifts we were granted in Golem and Nachtasyl, hotbeds of alternative culture that provided the bones for our baby. The provision of food has been an essential hallmark of our series from the beginning. A symbolic gesture of intended growth, it has been gratifying to see a real hunger in our growing audience. By adhering to our anarchic principles and cult of accessibility, Hafenlesung has developed beyond probability. The gates to the traditional domain of an ageing vanguard have been opened, the invitations rewritten. Thanks to the support we have received from a diversity of poets, authors, musicians, culinary artists, benefactors, and our audience, this series will continue its mission. Hafenlesung has already journeyed beyond the port to Berlin, Basel and Münster. Now we set our sights on new horizons. The way ahead is open, the winds of change favourable. This is a pursuit beyond borders, positively charging our negative capabilities. It is a story without an ending, written in tongues innumerable. We welcome you to join us. The next chapter begins here.« 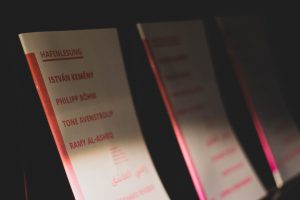